Another year of baseball is quickly approaching. College baseball has started. And High School baseball will soon start as well. On our River Radio network we will cover baseball for SEMO, Notre Dame High School, Sikeston High School, and a few games for Cape Central High School as well. Listen to games on 92.9 FM (KLSC), 1220 AM (KGIR), and 1400 AM (KSIM).

The SEMO Redhawks have a brand new surface to play on this year. With newly acquired head coach Andy Sawyers’s tenure beginning, high expectations continue for the Redhawks. The Redhawks are the preseason Co-Favorites to repeat as OVC Champs. I look for them to have another great year. Come out and support our Redhawks! It’s a great experience at Capaha Park, and should be even better this year.

And then there is the St. Louis Cardinals. Last year the Cardinals missed the playoffs while winning 86 games. The Cubs won the division, and well….we know what happened after that. The Cardinals looked old, slow, and lousy fundamentally. This year the organization reported they have put an emphasis and being more athletic. They made three big moves in the offseason. First, they traded Jaime Garcia to the Atlanta Braves for prospects Chris Ellis, John Gant, and Luke Dykstra. John Gant saw time last year in the Big Leagues with the Braves. Gant has an ERA of 4.86 in 20 games in the Majors. He has a chance to make an impact for the St. Louis Cardinals this year as well. I was able to talk to John Gant before he reported for Spring Training. Listen to my interview as we talk about his reaction to the trade, his arsenal on the mound, and his relationship with former Brave, Redhawk, and Scott City Ram Shae Simmons. 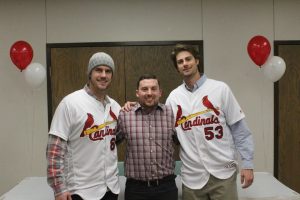 The second move the Cardinals made was building up their bullpen. After the news that lefty reliever Zach Duke would have surgery on his throwing arm, the Cardinals knew they had to act fast. They did so in signing free-agent Brett Cecil. Then they made their third move, another free-agent signing. The signing of centerfielder Dexter Fowler probably made the most noise in the offseason for the Cardinals. This move should help the Cardinals defense and lengthen their lineup. In my opinion though, the outfield depth is a little thin. Perhaps some unproven talent may get a chance prove their worth on the club. This is where 6’6 Jose Martinez comes in. Martinez made his debut last year after a long period spent in the minors. Martinez could bring some pop off the bench and help at the corner outfield positions. Martinez has a solid chance to make the club out of spring training. I caught up with him awhile back. We talked about his time in the majors last year, his interests outside of baseball, and the impact his father (former major leaguer Carlos “Café” Martinez) made in his life. 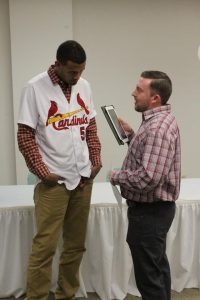 The news of Alex Reyes having Tommy John Surgery puts a damper on this season. The Cardinals do have depth on their starting staff. However, a number of them have question marks. It will be interesting to see the rotation coming out of spring training and how many different pitchers will make starts for them this year. My gut says quite a few. To be successful the Cardinals will need stability and more consistency this year than last.

Jedd Gyorko, Greg Garcia, and Brandon Moss provided a nice lift off the bench for the Cardinals last year. The bench last year was supposed to be a strength. But injuries ran rampant and they were thrust into starting positions and exposed at times. A few spots off the bench are up for grabs this year. Patrick Wisdom is a prospect that hopes to open up some eyes during spring training and slip into one of those bench spots. He is noted as a very good defender at third base. He spent most of last year in AAA. He batted .233 with 30 RBI in 78 games at Memphis. Although, I don’t expect Wisdom to break camp at the beginning of the year, he could be coming up sooner than later. I wouldn’t be surprised if he makes his debut with the Cardinals this year. Want to know more about Patrick Wisdom before he does make it to the Big Leagues? Listen in to my interview to get to know him better.

In my opinion the St. Louis Cardinals will end up about where they did last year; 2nd place in the division behind the Cubs. My prediction is that the Cardinals will win 89 games. That would be three games better than last year. I think they will once again fight for a wild card spot. This year 89 games should be good enough to earn one. That is my prediction, what is yours?

Agree or disagree with my opinion? Let me know your thoughts! Email me at espnradiorusty@hotmail.com or tweet me @rusty_hendricks

Stats and information taken from:

Are the Blues ready to take the next step?